The inception of the www.Tenindewa.com Website established in Tenindewa’s centenary year, 2014, was about accumulating as much history as possible of the preceding 100 years albeit starting from a quite disadvantaged position (ie “far too late”). However despite this it needed to be done and done in a relatively cheap way but with a reasonably attractive and accessible website that people could access easily. And so here we have it and as previously mentioned in other biographies on this site the books written about Tenindewa, particularly by Kathleen Rumble and Doreen Butler, gave us some clawback of information that otherwise would have been totally lost. But to this story, which, essentially, is about the Meadowcroft family has as an important aside in that it goes just someway to honour the late David Meadowcroft, the grandson of Arnold for his wonderful historical work. Like Kathleen and Doreen, David has written and indeed, recorded in voice, much on the entire Mullewa district, but especially on Tenindewa. 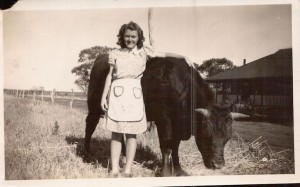 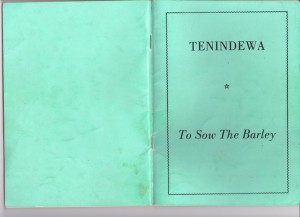 Arnold Meadowcroft (David’s Grandfather) and family, who in Doreen’s book “To Sow The Barley,” were one of the 7 founding families of Tenindewa that first braved this somewhat marginal area and its virgin lands and set about clearing and tilling it, thus becoming our first intensive agricultural pioneers. In fact she has written “Arnold Meadowcroft, (was) the very first farmer in 1905  which puts that family well and truly on the map from a Tenindewa milestone perspective”

Locally (ie Geraldton, Mullewa, Tenindewa) the Meadowcroft fortunes and acquisitions seemed to stem from this same Arnold Meadowcroft. Arnold was a businessman who in 1895 built his headquarters at the Corner of Marine Terrace and Durlacher St in Geraldton plus he owned considerable amounts more real estate in that very prime location.

At that time the services offered from this, well positioned, premises were Accountancy, a Shipping Agency, a Valuator, a General Forwarding Agent, a Land and House Commission Agent and an Auction Room. Arnold eventually accumulated a huge portfolio of land and other businesses that included the Mining Arms hotel at Nabawa and a taxi service that operated from that location. (The building, although a little neglected, still stands).      It was probably the last two divisions of that aforementioned multi-faceted business (Land and Housing Agency and Auction House) that gave him an entre into acquiring land in Mullewa in the early 1900s. 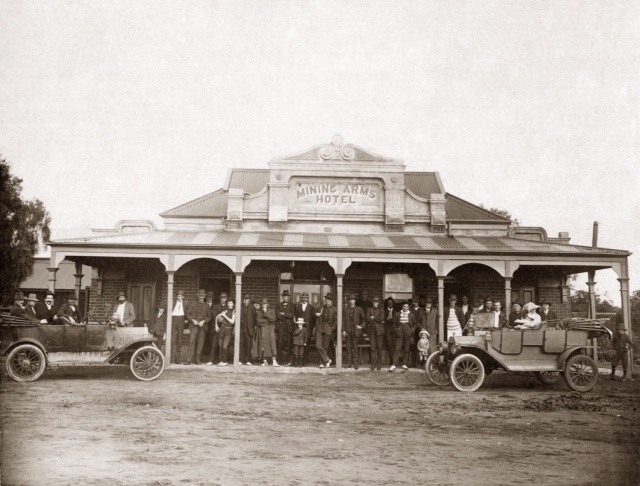 Arnold had a very adventurous beginning in life. He was born in Madras, as it was known then, in India in 1866. (Madras is now Chennai). His father was a New Zealand Congregational minister who eventually officiated as Perth’s Congregational Minister in the early 1870s

Arnold himself progressed to Geraldton in WA in 1884 to work for a Mr Henry Gray but quickly established a business for himself by 1888. He then sold his equity in this business to his partner and gained some wide and varied experiences by working firstly for Mr Wainwright, Mr Darling and then Mr Davis until establishing the premises and business mentioned above.

At a very early age Arnold married Maria Carson, daughter of Mr James Carson, a Pensioner Guard, and they produced 4 children including two sons, Clarrie and Charlie who became farmers at Tenindewa and at Devils Creek. Both of the boys married, Clarrie to Rotha Leach of Perth and Charlie to a Miss Nora (Hannorah) McGuinness, a local, who was the sister of a renowned district identity in Mr Vincent McGuinness. Vincent, a confirmed bachelor, lived and farmed adjacent to the Meadowcroft family at Devils Creek. This, it appears, worked out to be very fortunate for the notorious Vincent who remained a hard living country boy all his life. Because of his sister’s proximity she was able to spent much of her years caring for his health and sustenance. The two daughters of Arnold did not marry but eventually became the beneficiaries of much of the vast estate of their father. Interestingly Clarrie’s wife Rotha had a brother named Digby Leach, who became Commissioner for Roads in the 1950s and thus we have Leach Highway today thus named in his honour.

Somewhat of a sad aside to Arnold’s marriage was the fact that his beloved wife in Maria was a Catholic. In regard to change there is a saying that “a day is a long time in politics” but sadly with religion it seems the time span for change is more like 100 years. His father, the Reverend, David and family severed ties with Arnold and Maria as a consequence of that “mixed marriage” and from that day forward. Thankfully these days the people have spoken and it is the churches that must abide and schisms of this kind in families are very rare. It needs to be mentioned that possibly what added to this is that Mr. Carson, being “only” a Pensioner Guard, was deemed “not of high (enough) station” which also was a factor very much in play in society at those times.

Arnold eventually acquired land at Tenindewa in 1905 in purchasing lot #1 in the Wolya Estate which is just south east of Tenindewa Siding. That property was actually registered under Maria’s name and it was sold the Butlers in about 1920 along with a lease of 12000 acres (4800 hectares) of sandplain to the south. That sandplain farm was known as Poverty Patch and the entire acquisition made Butlers very big land holders in the district for that time 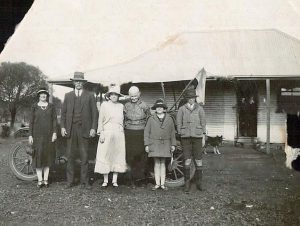 Cricked Scores from Tenindewa Tuesday the 19 of March 1912

In about 1935 Arnold was, with his skills and contacts as a land commission agent, able to purchase directly from the owners in England 17000 acres (6800 hectares) at Devils Creek. This land had been allotted to the Midland Railway Company by the Government as part of the deal for the construction of the Midland Line from Midland to Walkaway. Under the agreement between Government and the Midland Railway Company 12000 acres (3,000 hectare) was allocated for every mile of track laid. The Midland Railway Company could select land either side of the track they were building but were not necessary restricted to land adjacent to the track but could select up to 40 mile (60 kilometres) from the track. What had been prearranged by Arnold and others was that this acquisition was to be split up proportionally between the Keeffe Family (7000 acres), the O’Brien Family (5000 acres), McGuinness (3000 acres) and the Meadowcrofts themselves (2000 acres). It appears the way the land was divided roughly equated to 1000 acres (400 hectares) per “working son” as it was described to David. As to why a deal of this kind could have occurred is explained by the laconic Tom O’Brien in an interview with David that the four families were “all Irish and all related”. 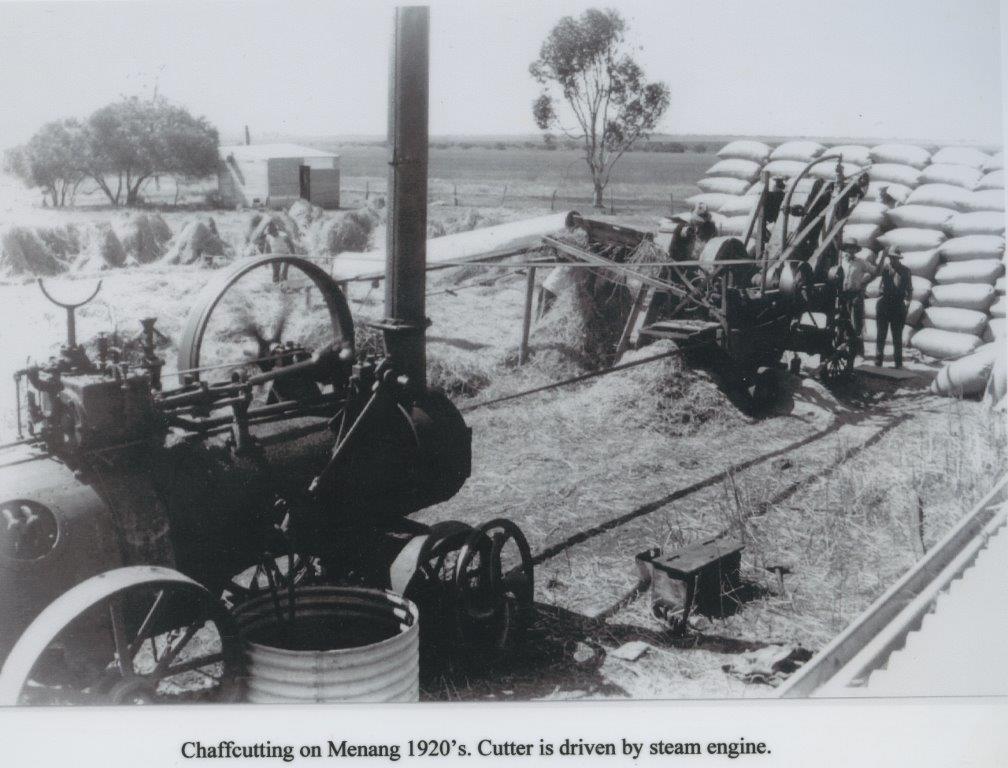 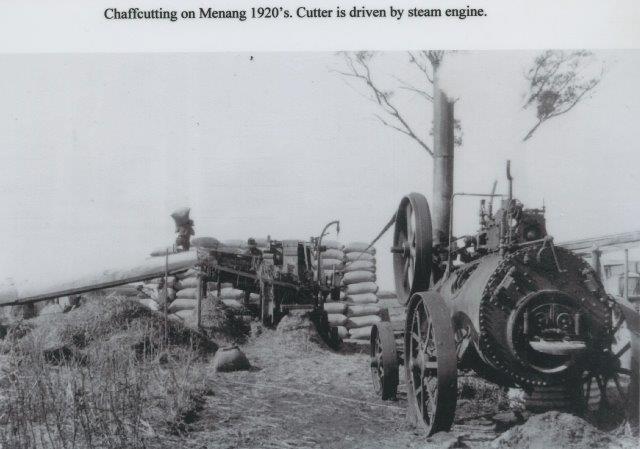 The steam engine (foreground) driving this chaff cutter was owned at the time by Mr Tom O’Brien and was shifted from farm to farm using several horses to pull it. This machine has been immortalized by a group of restoration enthusiasts and is now owned and displayed by the WA Royal Agricultural Society 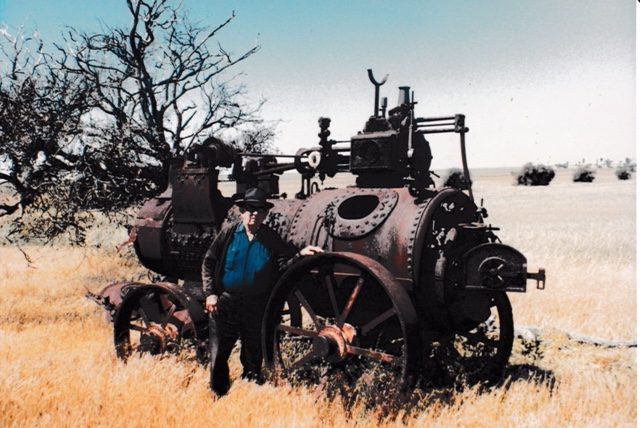 A slightly humorous adjunct to the above is a snippet that also confirms this “relationship” in an extract from the book titled “Mullewa…..through the years 1861- 1961” This important document was put together by Bill Barden (who was at that time what was known as Road Board Secretary or these days as Shire Clerk) and released in 1961 to coincide with towns Jubilee Year. The extract is titled “Devils Creek Area Developed” and it goes on; prior to 1912, a considerable area of land was taken up in what is now known as Devils Creek. Early settlers were J.J.Keeffe, Mr James O’Brien, and Mr Frank McGuinness. Others to settle in this area were Charles and Clarence Meadowcroft. The story goes that as farmers had to brand a farm name on their wool and Mr McGuiness branded his with “Angel’s Rest”. In a conversation focusing on naming the area a suggestion was put forward that Cousin’s Creek would be appropriate but it was Mr Clarrie Meadowcroft who on surveying the persons present suggest “Devils Creek” would be more fitting. 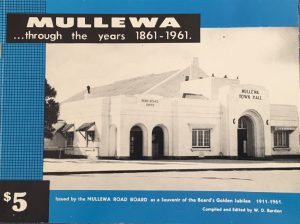 By 1910 Meadowcrofts had acquired a water reserve Lot 4610 of 300 acres (120 Heactares) which was in the Kcckatea area and named Thindindawah Spring and another including 100 acres Location 1598 (40 hectares) ½ way to Kockatea which was later sold to O’Briens in 1928. This one was known by a similar aboriginal name in Thundindinar Well which is a slightly different spelling to the former. It is believed that current day location of Tenindewa is a name anglicised from one or other of those places

In that same book Mullewa on the very first page is a copy of a letter from a Mr John Sydney Davis (MLC) dated 1st June 1861 to the Surveyor General and it is coincidental in that we see Mr Davis had applyed to purchase land from the crown that would have included some of the land eventually owned by the above families and most definitely by the Meadowcrofts. Davis too was targeting watering points but many years earlier and very possibly they are the same ones mentioned in the previous paragraph. Davis was certainly a man of means as at that time he was the owner of Tibbradden Station at Kojerina and obviously from the letter title a Member of the Legislative Council. 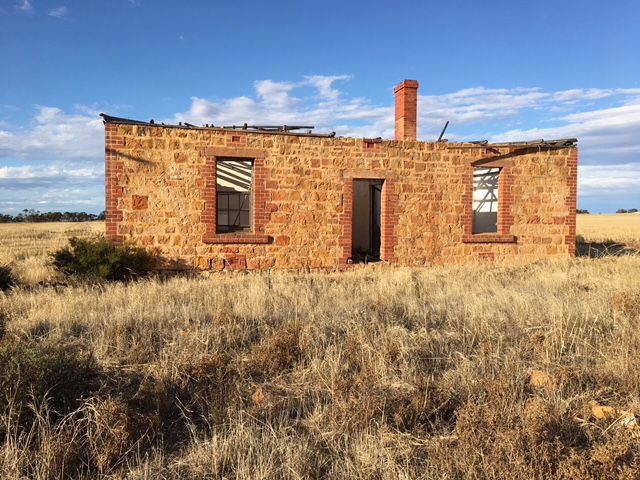 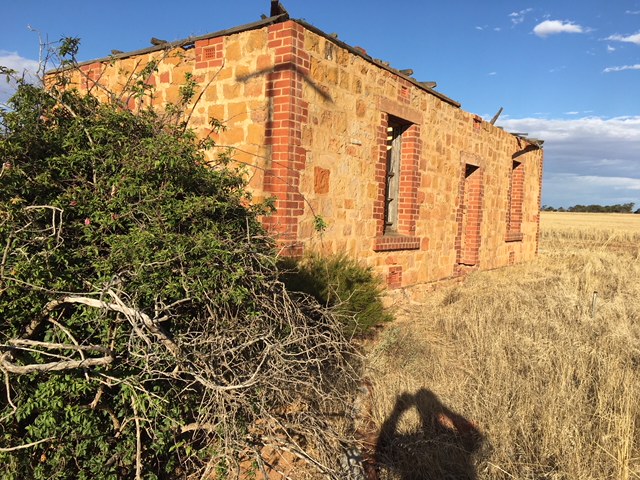 Two views of the relic of George Bones house as it stands now on Bone Road 10 Ks east of Mullewa on Andrew and Rodney Messina’s property. 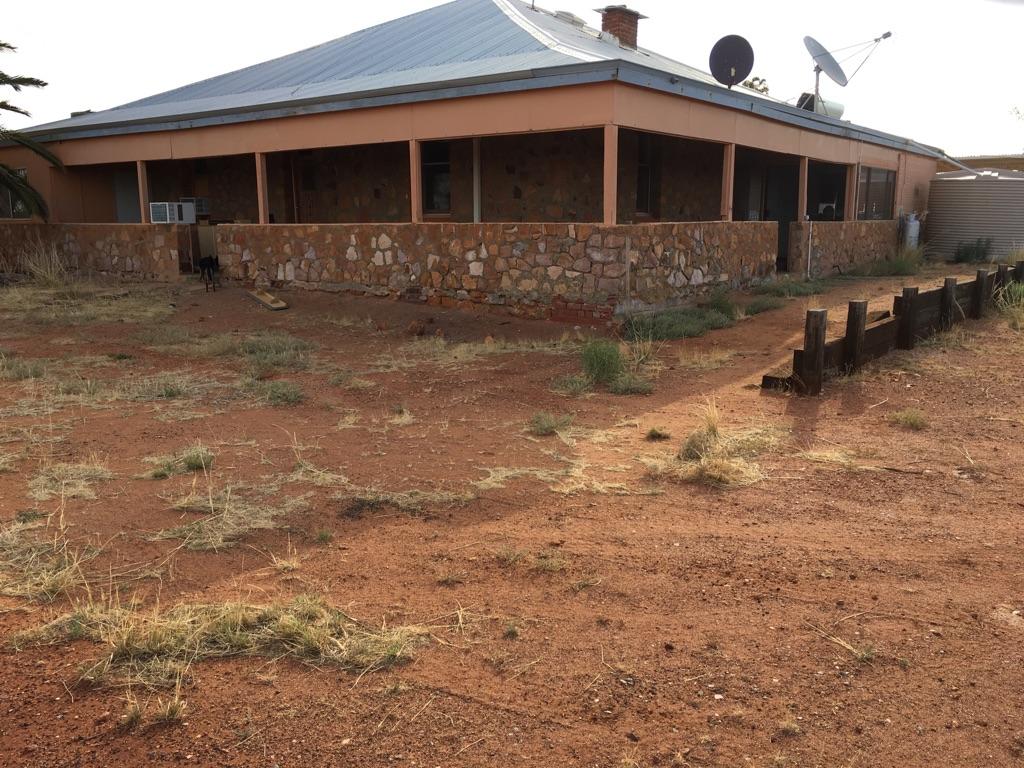 A view of the sturdy house from the north east perspective 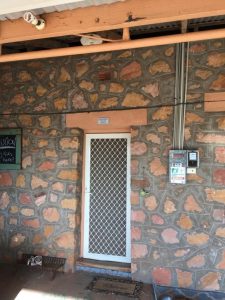 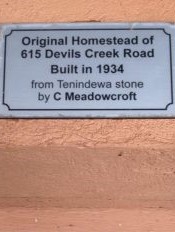 The plaque above the side door at the Devils Creek house

Arnold like many of our pioneer settlers in the Tenindewa Collection served on the Mullewa Road Board and no doubt, with his business skills and experience, would have been of great value to that important tier of government. He served in 1925 to 1928 under the chairmanship of Mr Dave Warren and who had been, many years previous, the very first Chairman of that Road Board. Other notable names that served in that period were Mr T Molster and Mr J.J. OBrien who in fact was still on the Board in 1961.

His father Clarrie was a keen football follower and played for Railways football club in Mullewa and became president of that club in the early 30s. 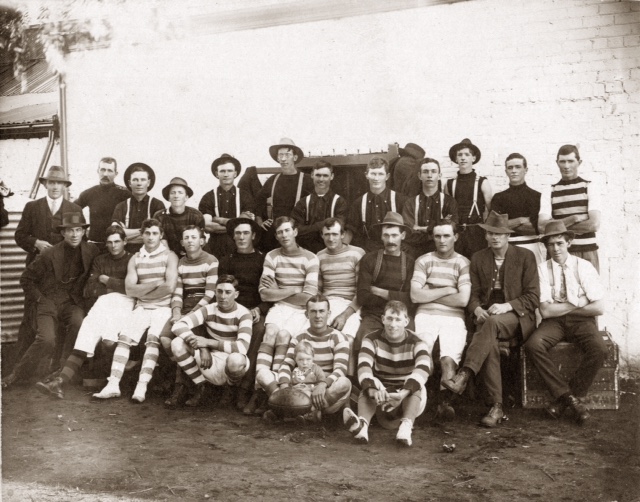 This is a photo of the Railways Football in Mullewa in the early 1900s. Clarrie 3rd from right middle row. 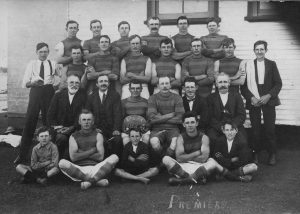 The Meadowcrofts left Mullewa in 1950 and moved to Perth. David Meadowcroft has been a huge contributor to collecting and collating of Mullewa history and willingly disseminating it to any history buff who has cared to ask for it. He has done many valuable audio tapes with Mullewa identities over the years and these are now in modern day disc form and available to hear or purchase in the Geraldton Library.