August 1st 1922 (From Our Own Correspondent)

Wedding bells have rung out once more and the first wedding was celebrated at Tenindewa today, Miss Jean Eileen Mary Eves being united to Mervyn .James Kember, both of Tenindewa.

The bride and her bridesmaids were beautifully attired and looked lovely, and the bridegroom suitably attired looked every bit a man. 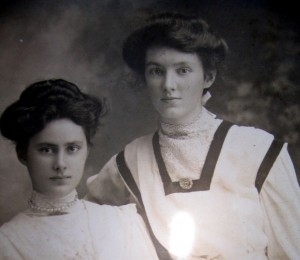 The Tenindewa Hall, where the ceremony took place, was decorated very nicely and a large white bell was overhanging the bride. A number of ladies arranged the decorations and the Misses Staffords were prominent in the work.

The whole countryside turned out to see the happy couple united—old men, young men, old ladies young ones and even all the kiddies. The hall was crowed, with over 100 being present.

The bride was the recipient of many valuable presents, and the residents handed her a very nice cheque also. The happy couple left by to-day’s (Tuesday) train on their honeymoon, and all hands wished them every happiness. The ceremony was performed by the Rev. Mr. Freeman, Methodist Minister

(The Hall referred to was 100 metres east of the current shop. It was disassembled in about 1945 and reconstructed in Peet’s Trucking Yard in Mullewa)

This wedding was one of only two that occurred in Tenindewa.  Gloria Butler was married to Bill Cox with the memorable reception also being at Tenindewa in 1956. It was Gloria’s sister, Doreen, who authored “To Sow The Barley” which can be found under HISTORY on this site. Reference can be found to this story (Cox/Butler) in “Butlers 140 Years” under PEOPLE on this site.