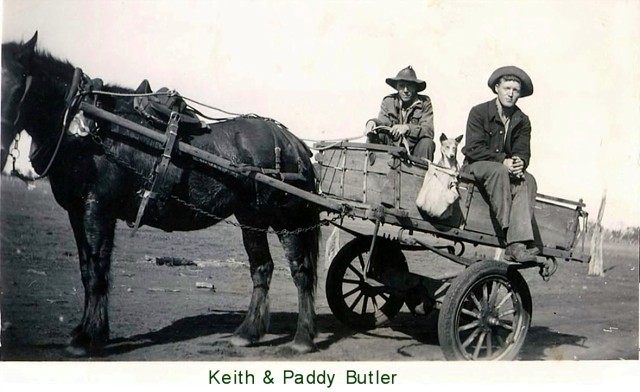 May I start by adding my condolences to Elaine, to Craig, Jenny and Alex, Gloria and Doreen and all of the extended Butler Family and may I say what a privilege it is to be given the honour of delivering this eulogy today.

There may be some members of this congregation who don’t know where I fit in regard to Keith and the Butler Family therefore I should explain that the Critches were virtually life time neighbours – adjoining  Redlands (the Butler’s Farm Name) at Tenindewa. There may also be some members of the congregation who are not familiar with Tenindewa so to explain can I say it is now just a dot on the map located about 16 Kilometer west of Mullewa.

Those of you familiar with Butler traditions will understand that I have been given starters orders and particularly in relation to time. So to start…………………….

In gathering the information for the following story I must acknowledge Doreen Lindsay (Keith’s sister) who some years ago wrote a beautiful short story of her Family and Tenindewa generally. The story some may recall is “To Sow the Barley”

This story paints a very vivid picture of when this was a pioneering district and of a truly pioneering family. In order to start at the very beginning and put you in this picture let me quote Doreen on her visit to the site of the original family home:

” As I stand on this now lonely hill, I close my eyes, it is hot and the sun bears down a souring heat, the flies stick to my eyes as they are wet with tears I am shedding, but before long I will control myself, as I know I must.”

And then she goes to what is before her:

“I see our home as it was then. We lived humbly and poor amongst weatherboard, corrugated iron and hessian lining, painted with white wash and old bag waggas for blankets. A tennis court of ant hill pounded and rolled, a swing in a tree and grannies house at the bottom of the hill.” 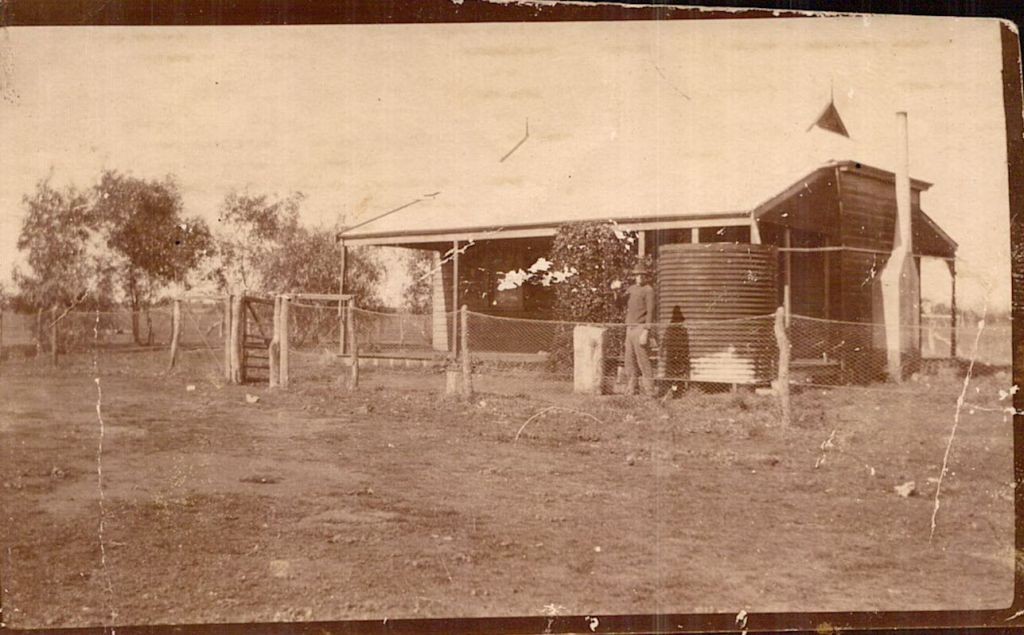 The place where Keith was born in 1929

“All that was left was the fire place and in my memories, I could smell the bread and scones cooking. A smell I have never experienced again. Cement slabs, which were the pitch from the old Tenindewa oval, where our father played cricket, were the wash-house floor. A rusty gate, which was once a bed end, a rubbish tip and the old air raid shelter”

“My brothers were the first born. One in Perth and the other at home (the home just described) on a cold night in July. My uncle, who lived with his mother at the bottom of the hill, drove an old T Ford through wind and rain to Mullewa for help, an experience never to be repeated, but talked about for many years”

Ladies and gentleman, that was the 5th of July 1929 and was clearly a tough start in life but just a taste of what was to come. Just after he started school at Tenindewa, a very rough bush school to which he walked each day, he contracted Infantile Paralysis or Polio and was hospitalized in Perth for over a year and most of that without family.

If I could focus your mind on another quite famous book for a moment and many will be familiar with a story by Allan Marshall titled “I can jump puddles.” Set in very similar times and similar circumstances the main character overcomes the debilitation of Polio and goes on to have a productive life. Polio at that time was a contagious disease sweeping the world and taking the lives of many, particularly children. It was not until the mid-1950s that it was contained through the mass immunization of all children. Keith’s story and the fist he made of his life was just as remarkable and I am sure would bring enormous pride to all of those close to him. In fact Keith overcame adversity and normalized his life to the point many would have been almost unaware that he had defied such a disease and forged this normal life.

Sport was strong in the Butler family and many would remember Paddy (Keith’s brother) and his uncanny ability to play and excel at almost anything and even some would recall Keith’s mother who was an outstanding tennis player. Keith understandably focused more on bowls and tennis and served various clubs in official positions but we will come back to this in a moment.

In 1959 Elaine Keeffe and Keith Butler were married at Our Lady of Mt Carmel Church in Mullewa formalizing a partnership that was unshakable. Keith and Elaine produced a son and heir in Craig in 1961 who went on to marry the gorgeous Jenny in 1988 and thus arrived Alex their Grandson in 1990. The thing that impacted on me was Keith’s loyalty to wife and family. He was a model husband and father by any measure and I know his passing is a great loss to Elaine.

The Butlers were farmers of course and would have endured some horrendously tough times as well as some joyous ones. Added to being born into humble surrounds Keith was born slap bang into the depression and I go to Doreen’s words again:

“There was no such thing as drought-relief or dole for farmers in those days. Our granny came to the rescue. She had a pension as she was an old lady, and they were always grateful to her and often talked of days when she gave her whole pension to feed our family.”

Times migrated from depression to war and it might come as a surprise but the war came to Tenindewa too.

“The war had begun and our fields were nothing but aerodrome and army trucks. Our days of peace had gone. The Air Force took one of our paddocks as a drome. One plane crashed in the creek. We were not supposed to touch it but my brothers managed to get a souvenir. They had a big camp near the old bush school and were there in their hundreds and took rain water as they pleased and were a general nuisance.”

Incidentally Tenindewa must have drifted back into normality but amazingly during all those years of duress Tenindewa and its community managed to have a Christmas tree. Incredibly added to the list of his many amazing achievements Keith missed only one Tenindewa Christmas Tree in his entire life and that was during his period of confinement.

To mention all of Keith’s sporting contributions would be too time consuming but I must highlight his Mullewa Bowling Club life membership and his remarkable contribution to the Mullewa Football Club in which he served as Secretary Treasurer and as Time Keeper for thirty years. He created a record that I guarantee will never be broken in keeping time for in excess of 1000 games. He was again recognized for service from the Club with a life membership.

Finally I must mention his faith in God and his dedication to his church. If the Pope was into giving out life memberships he would surely have featured there as well. His work at the church over the years was enormous and he served officially as President of Our Lady of Mt Carmel School’s “Parents and Friends” for some time. More lately he was a volunteer at the Mullewa Tourist Bureau and the Monsignor Hawes Museum.

In concluding I need to mention a last accolade and it is by special request. But in carrying it out I must make no apology for my emphasizing the fact that this man was one tough, unflappable individual.  He survived “the depression” and all the financial challenges associate with farming. He had Polio and had a Triple Bi-Pass operation and Ladies and Gentlemen he also had Craig. So the special request, Craig has asked me to highlight is his father’s final impeccable touch of timing in living to see the Dockers receiving the trashing of a lifetime by Keith’s beloved Eagles. 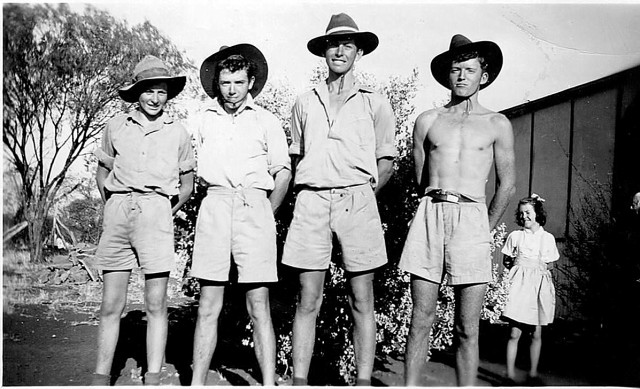