(Written by his children and abridged and modified by Tony Critch)

Our father, Thomas James Moore, was one of those timber-cutting log splitting new recruits from the back blocks. A keen observer of the human condition, Tom was a strong advocate for social justice. If this fact seems at odds with some of his diary observations, readers must be mindful of their historical content, the prevailing values, attitudes and beliefs of his times, and of Tom’s own background and experience.

Tom may later have come to agree with Fr Devine’s view that the “medley of khaki [was] a great leveler of social inequities”. Older than many of the others as he steps into khaki, slings his rifle, dons his brown hat and sets out for war, his war diaries reveal Tom to be a firm believer in the power of the Unions, in the political process and of the Labor movement in particular as a means to an end.

Tom was born in 1881 to Thomas and Mary (nee Quin(n)) at Knowsley near Bendigo Victoria the youngest of four boys and two girls. His mother, a Catholic from Corofin, County Clare, Ireland was a twin daughter of Laurence Quinn and Isonora Lynch. His father was also of Irish ancestry but born in Liverpool to James Alexander and Mary Moore and baptized Anglican.

Tom’s father arrived in Australia around 1857 and was a laborer and contract farmer at Langworner Station, Wild Duck Creek, McIvor Parish, Victoria. He was known locally as “Red Tom” –his hair color—to distinguish him from another Thomas Moore in the area.

In 1887, when Tom was seven, his father died due to the effects of alcohol. According to the Inquest documents, two doctors had refused the request of Tom’s 16-year old brother Robert (Bob) to attend (to) their farther at the farm; the family was too poor to pay.

Four months before the same doctors had hospitalized Tom’s 45-year old mother with a debilitating thyroid imbalance. Due to her prolonged hospitalization Tom and his surviving sister Bridget Margaret (Maggie), 10 were reared by family friends, the Courtney’s, on their neighbouring farm at Wild Duck Creek.

Tom did chores on the Courtney farm before and after school and walked—but sometimes rode—the 12 miles to school and back barefoot like many children. Although he left the Government school at the age of 12, Tom later continued his education at night classes.

Move to Western Australia – work in the Timber Industry

At the turn of the Century and just after Federation, Tom acted on his brother’s advice and followed him to Western Australia to take up employment in the Timber Industry. In 1904, Western Australia had 35 Timber Mills. The mines, the burgeoning West Australian population and a spreading Railway System had created a strong demand for timber, especially for karri and good quality hardwood used by the government for bridges, jetties and railway sleepers.

Tom was actively engaged in politics and from 1909 was a member of the Western Australian Division of the Australian Labour Federation. In 1913, when Mr Peter L O’Loghlen resigned as the Labor MLA for Swan to contest Sir John Forrest for the Senate Seat of Swan, Tom easily won the selection for Forrest against strong opposition. He held that seat until O’Loghlen returned to WA (politics). Tom resigned his position to allow O’Loghlen to seek re-election to the Forrest seat.

Following the outbreak of war in Europe on the 4th of August in 1914, Tom was outspoken in his opposition to the Prime Minister William Hughes and his Federal Labor Government push for Military Conscription. Just prior to the rejection of the Conscription Debate the Geraldton Express reported that:

Tom Moore…..led a detachment of Laborites into Blackboy Camp a few days after the first Referendum…was taken and when a No majority was assured. Tom was an ardent opponent of the compulsory measure, and toured the country at his own expense to bring about its defeat. When he had affected his purpose, in order to demonstrate his loyalty to Britain’s cause and to manifest his desire to further the voluntary system, he enlisted, and influenced about one hundred others to follow his example

Tom embarked at Fremantle aboard the Barrima on the 23 December 1916 as a member of the 8th Battalion Australian Imperial Force.

Among the many letters Tom wrote which took many months to reach Australia, he revealed, in the January 1918 he was ”at latest dodging Fritz’s shrapnel” and “had many narrow escaped”. However participation in the fighting at the Western Front ended for Tom at the battle at Dernancourt—Albert in defence of Amiens for on the 5th of April 1918, he sustained severe wounds to his face and right shoulder.

Tom was evacuated to England for treatment and spent some time recovering there before returning home. He reports from his comprehensive diary encompassing the convalescing period that on the 3rd of August 1918 he attended the opening of Australia House. He mentions King George speaking with him and asking him a “foolish question or two”. He suggested “King G looked bored to death” but the Queen (Mary) “looked her part”

Tom was selected in April 1920 to contest the Election for the Western Australian Parliament’s Legislative Council seat of Central Province. Tom won that seat in May 1920.

In November 1920 Tom, with his brother Bob, took up land at Indarra, (6 Ks west of Tenindewa) a railway siding 23 kilometres west of Mullewa and situated centrally in Tom’s electorate.

Tom met 30 year old Geraldton nurse, Evelyne Kelly, in 1922 and they were married on Christmas day, 1922 in the Stella Maris Convent Chapel, Geraldton. A daughter, Moya, was born in October 1923 and a son, Thomas, in February 1925. Evelyne died on the 1st of March 1925 a few days after the birth of Thomas. 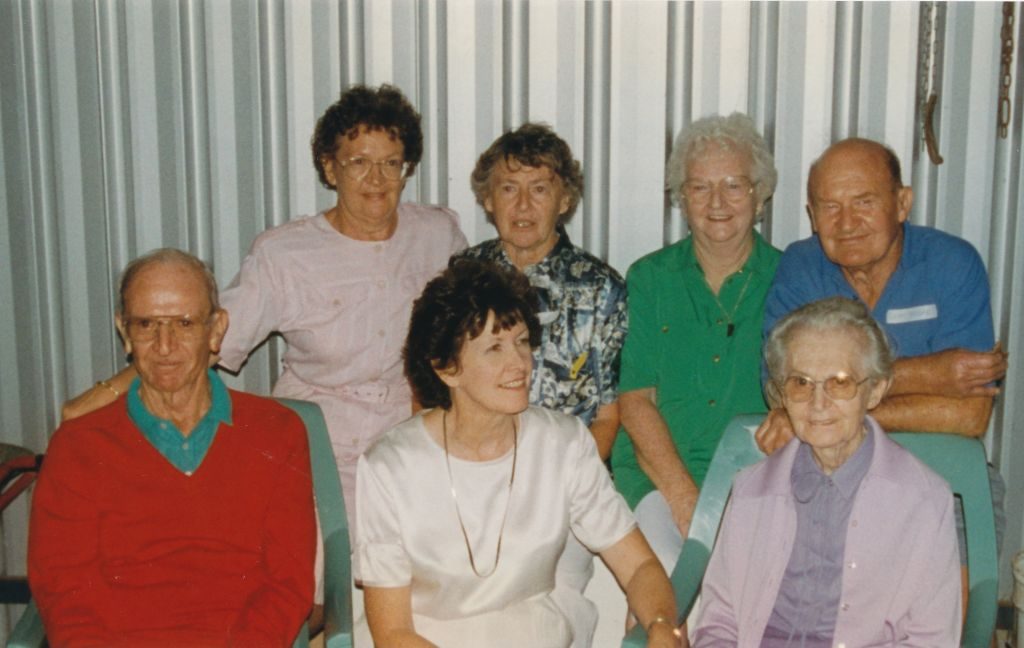 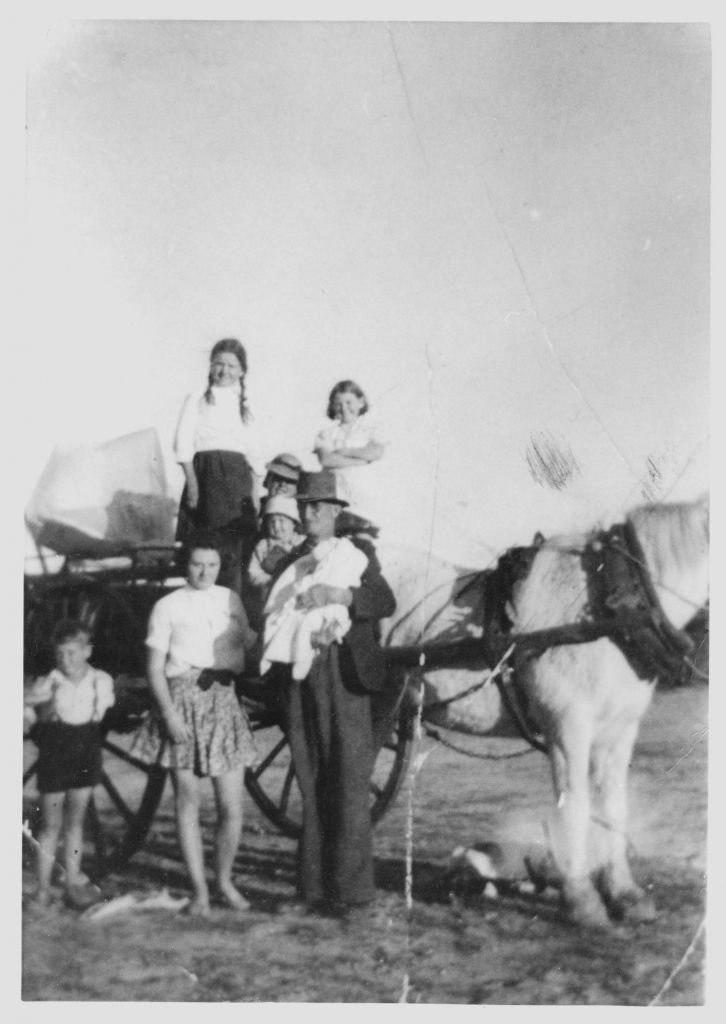 Tom (nursing one of the twins) Moya to his right and Robin to her right and Gavin in middle of picture.
Glady (with the hat) Colleen to her right and Sheila to her left (1950).
This horse and cart ensemble was still an active part of the goods and shackles at Kelmore Farm into the 1960’s.

On the 27th of August 1929 at St Francis Xavier’s Cathedral, Tom married Gladys Kelly aged 22 years, the youngest sister of Evelyne, who along with her mother had been looking after young Tom and Moya.

Tom became the State organizer for the ALP, and at the May 1932 elections he regained the seat of Central Province which he held until his retirement in 1946. 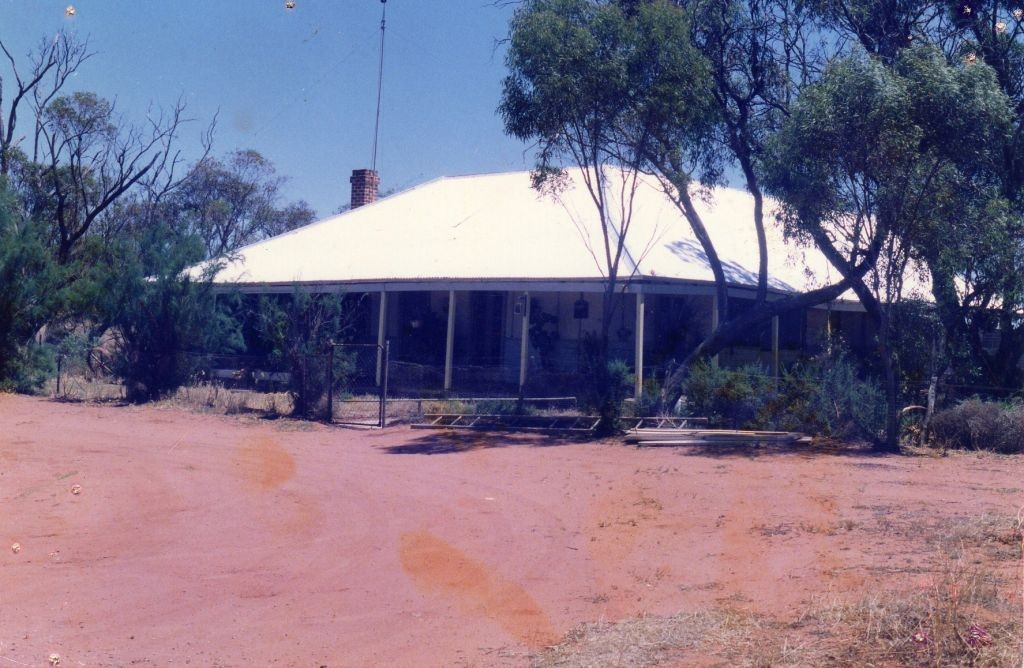 The farm at Tenindewa had prospered and Tom entered the MT Padbury Competition for growing wheat (A State wide competition) He won the trophy outright in 1940/41 by way of the fact he had previously won it in 1935 and 1938. (Those prestigious trophies are still in the safe keeping of his grandson Murray).

Tom continued farming at Tenindewa after his retirement. He was in frail health for some years before his death on the 31st January 1961. He was survived by Gladys and 9 children and 11 grandchildren. Gladys died on the 4th of August 1980

The farm was 5 kilometres down Moore Road which runs south from the Geraldton / Mt Magnet Highway.

During Tom’s parliamentary life and from a Tenindewa point of view it must have been quite extraordinary for local folk that they had not one but two Labor MLAs and both living at Indarra. Michael Troy MLA (Member for Mt Magnet) served from 1904 through to 1939. He successfully farmed there and incidentally he also built a substantial house (for its time) which still stands and is occupied to this day. He held many port folios including Minister for Immigration, Agriculture and Lands and was acting Premier on three occasions. He subsequently served as Western Australia’s Agent General to London for many years

In terms of recruits from the district of Tenindewa for the war in which Tom served (The Great War) we know of at least two more that volunteered but were not as fortunate as Tom to return as they made that ultimate sacrifice. Memories of a Migrant by Kathleen Palmer notes:

“Lew Stafford and a chap who was working for them Bert Jones decided to enlist. Those boys wanted to kiss us girls goodbye but because of our reserved upbringing we would not let them. Looking back how I regret that decision as Lew and Bert were soon blown away”.

Lew and Bert lived and farmed about 9 Kilometers down the Tenindewa/Yuna road. 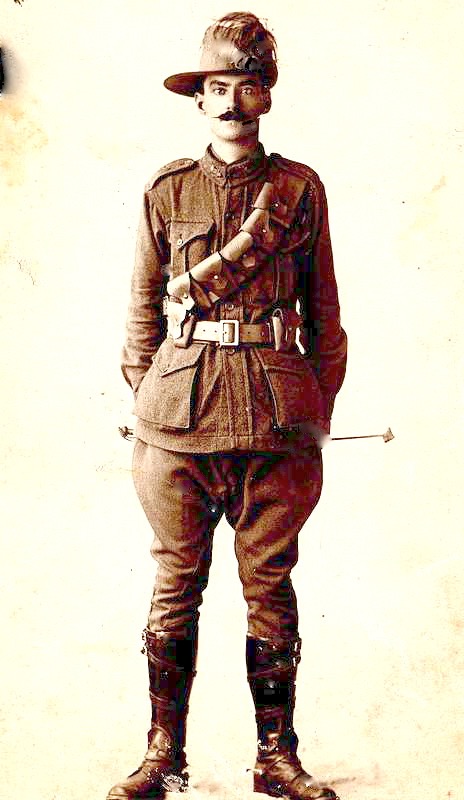 Lewis Harrington Stafford. Aged abt 26. Going off to WW1 Feb 16th 1916 on the ship SS Warulda. It was Eva’s birthday. 1500 men and Officers on board. i have his war diary x 2. He died whilst on duty in Zonnebeke Belgium France.. Monday 8th October 1917. His final mission was with the 110th Howitzer Bty 10th F.A. bgde 4th Autsralian Division. 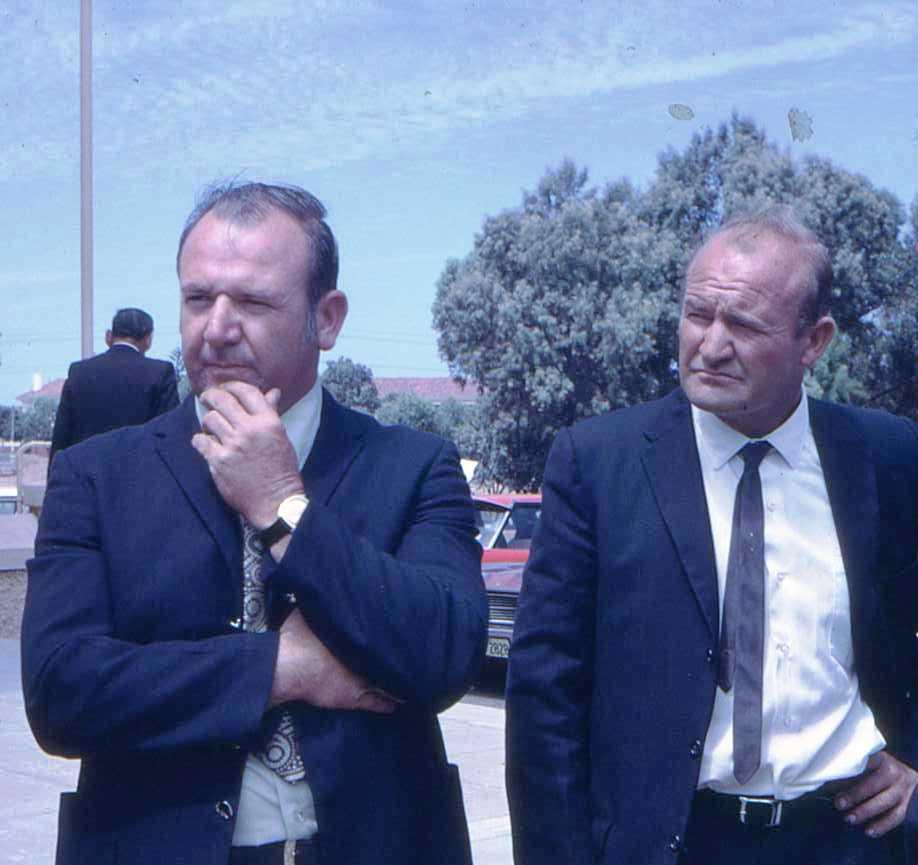 After the passing of Tom snr both Gavin and Robin in that order had a hand in running the property. Robin and wife Carol were the last of the Moore’s to live there and after Carols passing in 1977 Robin toiled on until his health failed and he sold the property in 1997. 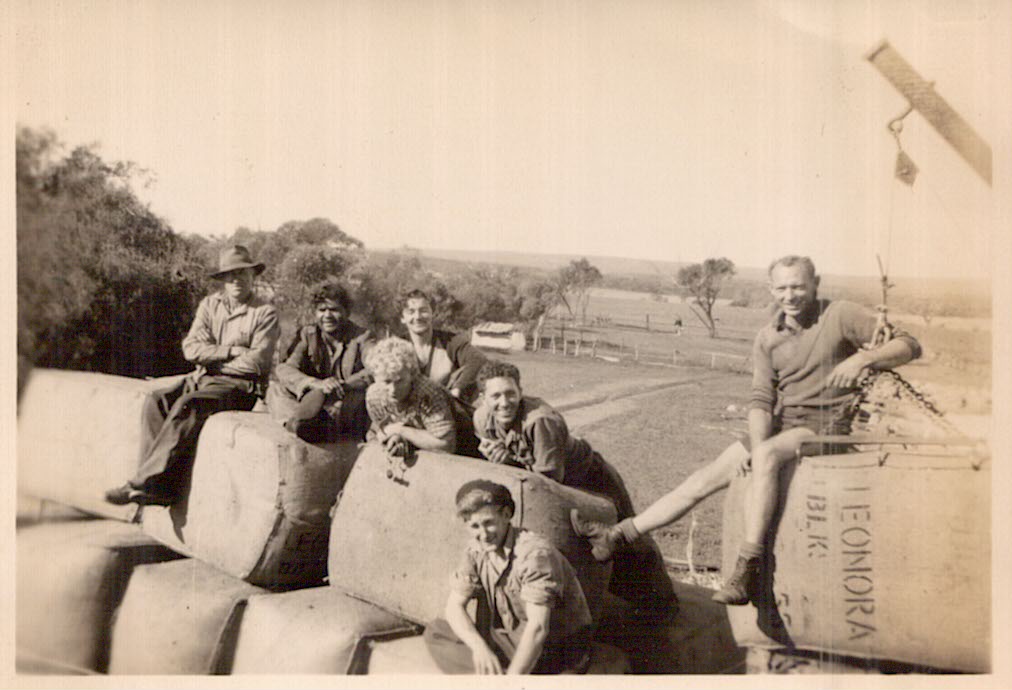 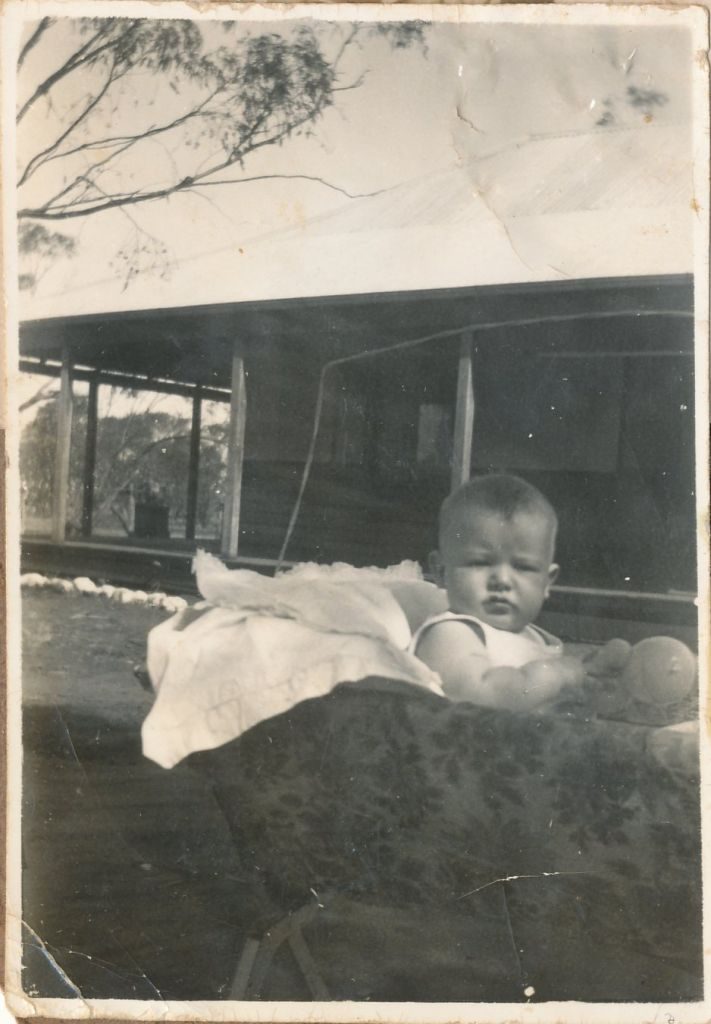 Gavin outside the of the Indarra farm house. Maybe 1930 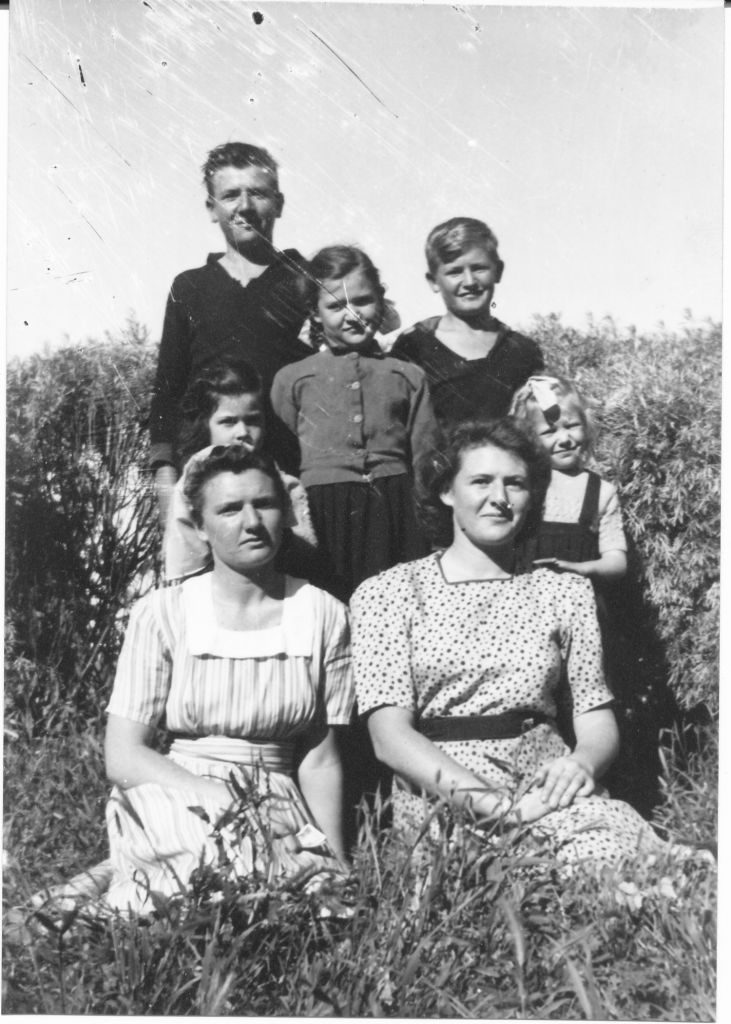 Robin and Gavin at back Philomena centre Lorraine and Loretta (the twins) with Sheila and Colleen at front. Picture taken about 1951