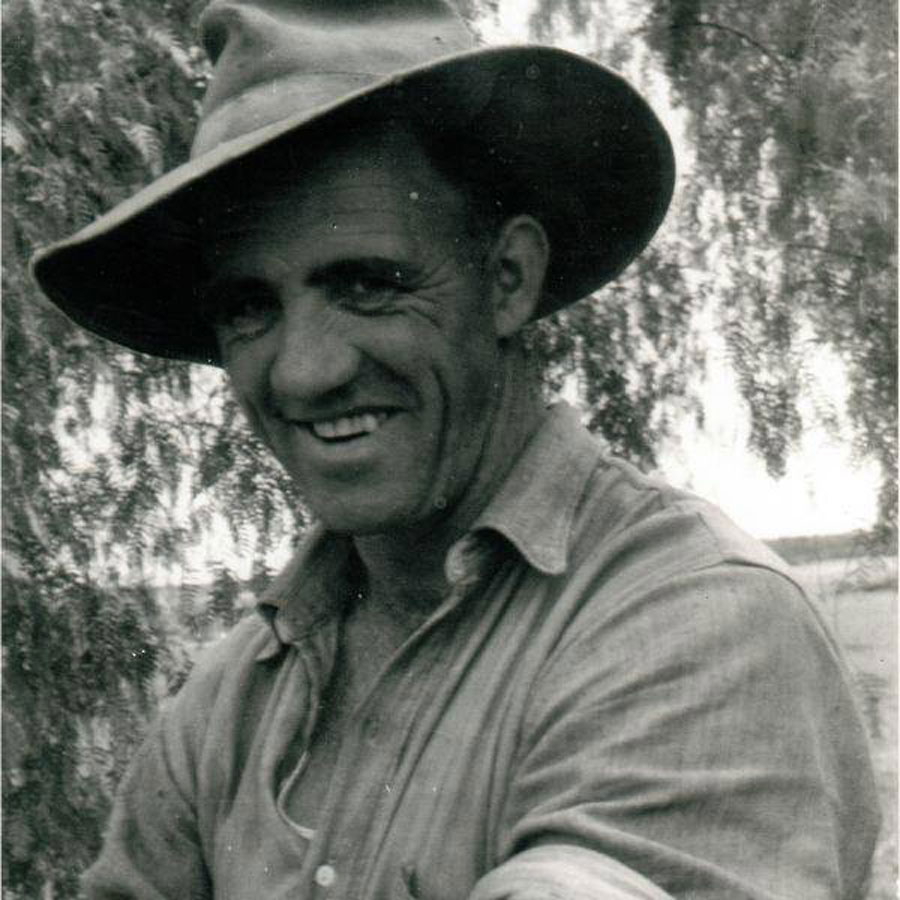 Dad was one of the last old timers…those that grew up when everything was hard work. He was born in 1916 in Subiaco. Son of Arthur William and Elizabeth Mary and came to Mullewa at 3 weeks old by train. He had two older sisters – Phyllis and Esme and brother Ron came later. Like Dad, Esme lived until 94.

Grandad was share-farming on a small block just out of Mullewa on Sutherland Rd just near Woodaradden Creek. Dad went to school in Mullewa until he was 15. Each day he and Esme would take a horse and cart into town to go to school. As Dad grew up they used to deliver milk into Mullewa in the mornings by horse and cart and then by motorbike and sidecar.

Arthur and Esme off to school

Dad played football in Mullewa for Railways against guys like Glen Keefe and all the old timers. At half time they used to bring out the whiskey bottle and give the boys a shot, especially if it was cold. There is a story that because Dad was a little shy and did not like to throw his weight around they used to give him a bit extra. Once he knocked one guy out and when he went back to see how he was, the people on the sidelines said “don’t worry about him, knock another one out”.

Another story is playing against Glen Keefe (which might have been Devils Creek), one of the hardest and fairest players he played against. Dad had the ball and he saw Glen coming at him out of the corner of his eye and braced himself. Glen bounced off and Dad heard him say “like the bloody Rock of Gibraltar.” What Dad didn’t tell Glen was that his teeth were rattled and his shoulder sore for a few days after.

Dad had a horse called Brownie which he used to ride with no bridle or saddle. He used to chase kangaroos with Esme and a bunch of Kangaroo dogs, shooting them off horseback. He spent a lot of time in the bush.

Dad was a very shy man. He told me a story of a nurse at the Mullewa hospital where he used to deliver milk. They used to chat a bit and I think she was keen on him. Dad never went to the dance and when he saw the girl later he asked her did she go, she said “no I was waiting for you to ask me”. I think Dad always regretted not asking her.

The depression hit in the 30s and Grandad was forced off the farm. Dad went and worked in Wiluna in the treatment plant of Redies mine for 5 years. He got man powered during the Second World War and did not go to fight.

He met Karlene’s mother, Nancy and they moved to Kalgoorlie where Dad worked on the Oroya Mill for another 5 years. In 1947 Dad and Nancy were married.

All this time Dad had one dream and that was to own a farm in Mullewa. They decided to move back in the early 50’s and Dad got work with the Diproses.

The Farm in Tenindewa

In 1954 Karlene was born and the same year Dad bought the farm north of Tenindewa. He continued working at Stan Diprose’s place (where Mick Doherty’s sheds are now) and Nancy used to do the cooking for the workers. Dad would go out the farm to clear the land on the weekends – using an old roller and crawler tractor.

In 1957 Nancy died suddenly while pregnant with their second child. It was the year of their first crop. Karlene was 3 years old. Dad lost his job with Diproses and he and Karlene moved to the farm where they lived in a tent for 3 years. They used to use a washing machine run by an old Fordson tractor.

Dad worked the farm and even as a child, Karlene would help him out. When Dad wanted to move paddocks he would sit Karlene on the crawler, tell her to steer it and set her off. At harvest Karlene used to sleep in the wheat bin on the harvester.

I don’t know how he did it, this was a very tough and lonely time for Dad. I think the main diet was Kangaroo. He eventually got enough money together to build a two room shack with help from his nephew Darryl Renton (Esme’s son).

Dad’s neighbours Bill and Anne Sutherland looked after Dad a lot – inviting him over for meals, taking him to Geraldton etc. There was a bit of matchmaking going on by the Sutherlands. In 1963 Dad met my mother Enid. Mum was over from Melbourne nursing and Mums sister was married to Bill’s uncle, Tom.  The first time she saw Dad he was carrying a bath on his shoulders. Dad used to tell me that mum started writing to him so he started writing back and romance flourished.

Arthur fallowing at the Diproses 1953

Arthur and Karlene at First Harvest on the farm in 1957

My memories of Dad

My first memories of Dad are in the summer with this big barrel chested man with big hands and me climbing all over him. He was always big and strong to me. Growing up with him and kicking the footy, going Fishing, taking the kangaroo dogs down to the river and hunting kangaroos. We used to camp out and do all the things dads and sons do.

Those of you who know Dad would realise that he was not the easiest man to get along with – just ask Karlene and myself. But he had a kind heart and one of his proudest moments was giving his grand daughter Lynda away at her wedding.

Growing up and working with Dad was not easy. We’d fight light cat and dog but he taught me a lot and as I matured and he mellowed we formed a really good working relationship. For an older farmer, Dad was very open minded and interested in agriculture. He had a small methane gas plant down at the piggery.  He planted johoba beans and was interested in living off the land. Pablo reminded me of him taking pigs to market.

He was also very practical in a rough sort of way. He’d tinker with something until it was fixed or make things. I think the whole farm was held together by araldite, wire and fibreglass. He used a mintee to fix a leak in the header auguer once.

He was a good cook and had his own sewing machine. If I needed a patch, he’d put it on for me. I loved his stews – during seeding he’d always cook up a big stew that would last for days and even when he moved to Kalgoorlie – I would drive up and he’d have one ready for me.

In 2005 Mum died and this really knocked the wind out of Dad’s sails. I don’t think he really got over it. He stayed with me for about 3 or 4 months until we got him a unit in Harbour Pines in Geraldton. I’d even stay there with him in my swag when I came back from overseas.

In 2008 Dad moved to Kalgoorlie as I was working overseas. He wanted to get to know his grandchildren, Lynda and Murray and his great grandchildren, Kiara and Kynan better – and spend more time with Karlene. He lived there until about 3 weeks ago when he moved backed here to Nazi house. I went and picked him up and was really excited that Dad was home.

Dad had 3 big falls in his last 6 months and I think it’s a testament to his toughness that although he was battered and bruised he would still pull through ok. The last fall was just too much for a 94 year old to handle. When I explained to him what was going on, he called the Doctors and told them to get on with it, but the risk was too high so I would not have been surprised to hear him ask me to wheel him down to the shed, get the brace and bit and fix the problem.

He was cheeky right up to the end – trying to chat up the nurses.

Dad passed away on Tuesday 16 March. He was just a good old bloke who grew to be my best mate and I miss him so much. 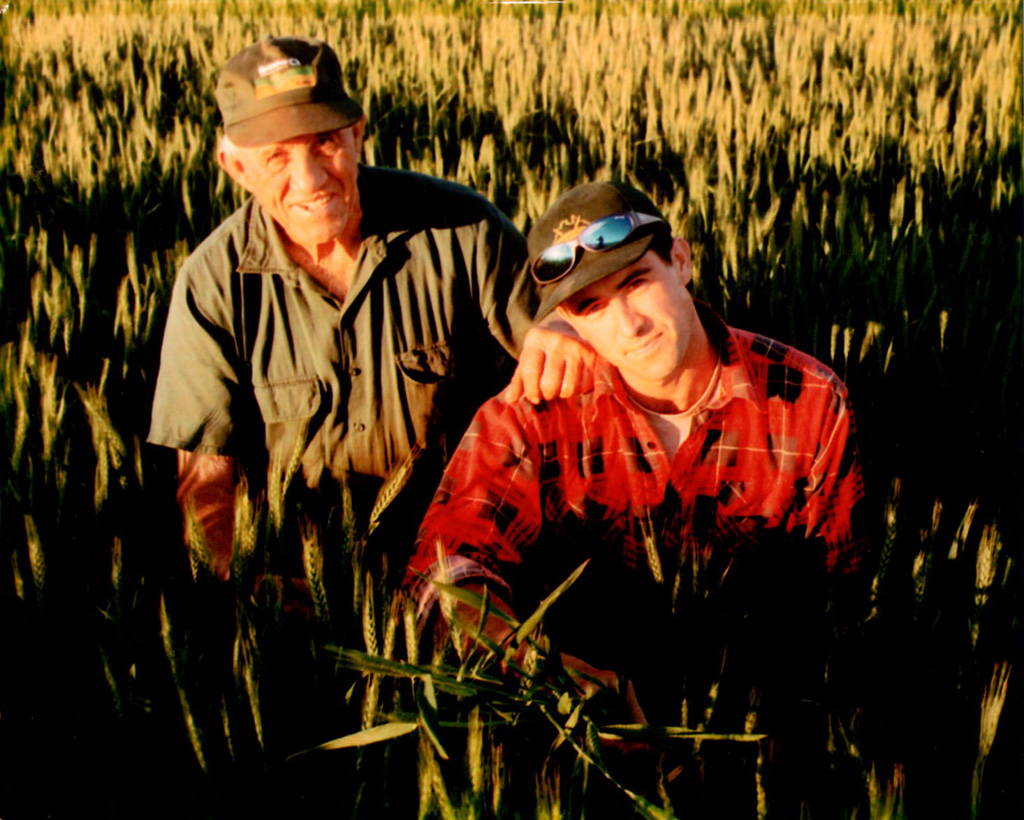