The “Big House” owned by Fry south of the highway and opposite the store was sold to an Alexander Petroff along with the associated farm in 1926. 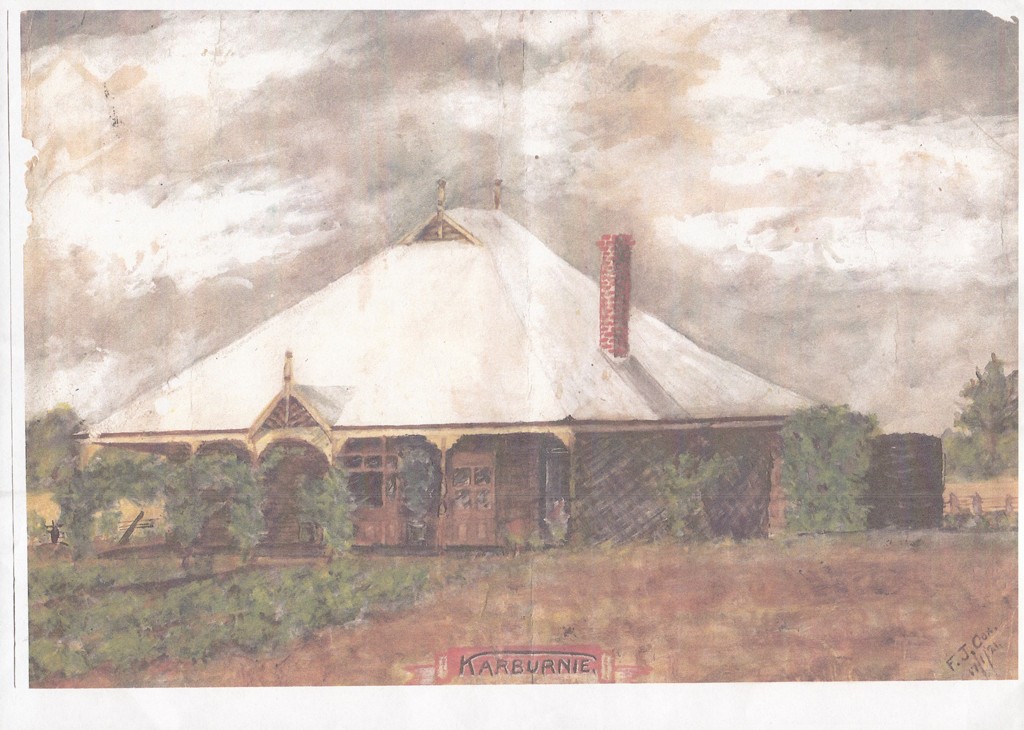 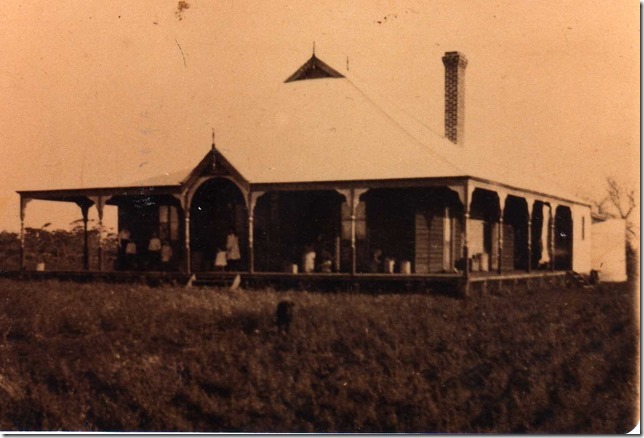 As his name suggests Petroff was Russian but it is very possible his name was not Petroff but Alexei Belevsky-Zkukovsky and either way was almost certainly a refugee from the savage dangers of the tumultuous Russian Revolution that was gripping that country at that time.

Initially local folk law and gossip had it that he was indeed a product of the, by-now, deposed Russian Royalty and closely related to the last Emperor, Nicholas the second. He was for a short time married to a local Tenindewa school teacher Jessie Cameron who produced him three daughters. One of these daughters (Olga) passed away in Geraldton in September 2013 but she in turn has a surviving child who still lives in Geraldton. She also has a surviving sister, Phoebe. (See the Geraldton Guardian clip of Tuesday the 5th June 1923). Mr and Mrs Alexi Petroff have recently returned from their honeymoon and are now nicely settled at “Kaburnie” [the Big House]

In early March 1926 Petroff mysteriously disappeared and pretty much without trace to this day however a letter did arrive at Tenindewa addressed to Jessie dated 17th March 1926 and it had been posted from Adelaide. (The letter survives to this day).

May Darling Wife Jessie!! I writing dis leter wit Croking dawn garvied (with broken down grieving), wcos you mdet naw I wos filing wen (because you might not know [how] I was feeling when) I see you last. I will wel Cac (come again in twelve months time) again 12 monts Toem. I wrat to you agein from Melborn Tomoro Tauk. Cer of may darling Neonela (Olga) f . N I feems of or Jessie wont to be.God Protect you ma Darling Darling Darling Milions Milons Darling. Ma babe to oe (My baby to be?) (Jessie was pregnant at that time) 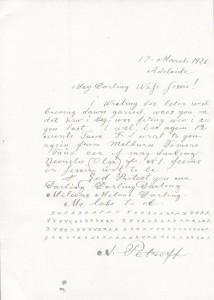 It is interesting that in as much as the English in the above letter is “agricultural” to say the least the handwriting is of a person that was highly educated and talented. The other thing about the letter, as one guesses their way through it, it certainly does not sound like it was from a person that was wildly excited about leaving which brings us to the point of why he may have left.

The Bolsheviks, Marxist-Leninists, Communists who were the group or groups of the day in Russia that had gained political and commercial control also had quite a bit of support in many other parts of the world including Australia. That sympathy for this movement continued to grow and reached a peak in Australia in about the 1950s. Seemingly Petroff was always on tender hooks as to the fact that some of these folks might have it that he was of more value to them as a dead person and people close to him knew it was a very genuine fear. Many of the old residents concluded that what may have “spooked” him to leave was that because Tenindewa was a railway station in those days and thus it also had its own fettlers gang (repair crew) stationed and housed locally.

The houses they lived in were the most rudimentary of dwellings and the task for which they were employed would have been extremely tough especially in the height of summer and many, if not most, of the personnel were immigrants from literally everywhere in the world. Given those conditions, one would imagine the turnover of staff would have been high and thus, there was always someone new coming and others going.

Largely this is a story that is to be continued and frustratingly the mysteries associated might never be solved, but, along with quite a bit of memorabilia that is in the safe keeping of his granddaughter is a very well preserved photograph of Olga Romanov (aged about 9 years) the daughter of the last Emperor, Nicholas the second.  On the back of the photograph is written in a child’s hand but perfect English (which is a bit surprising) “To dearest Uncle Alexi love from Olga”

As for Alexei Belevsky-Zkukovsky the sketchy results of research from Russia concludes that he either escaped to Germany or died in the North Caucuses fighting with the White Armies and Cossacks against the Reds. 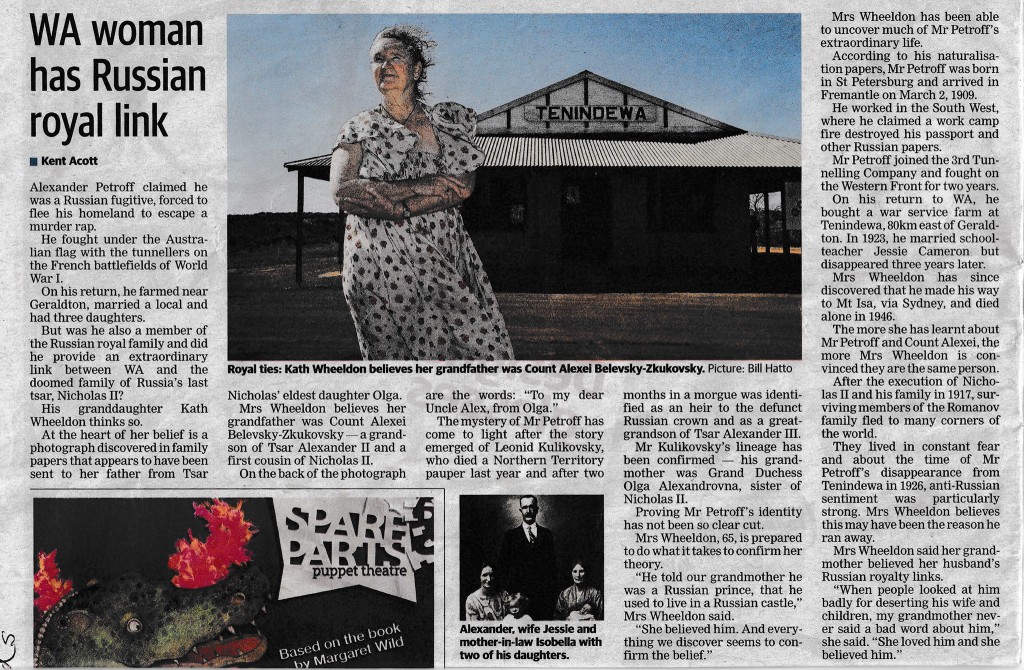 Article in The West Australian 4 January 2016……. You can google the extra ordinary story of Leonid Kulikovsky to see the similarity with the story above 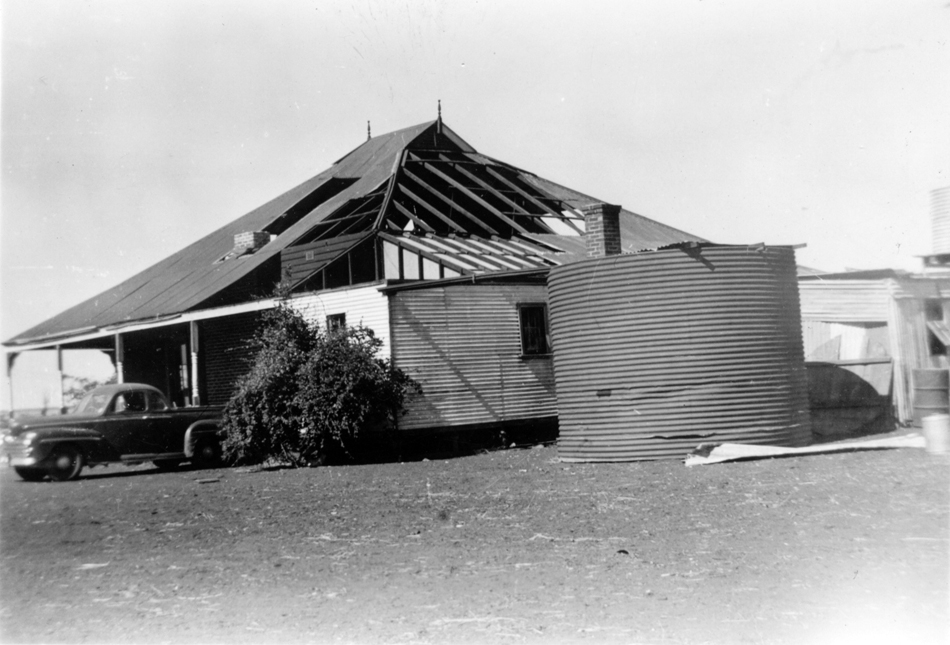 This is the result of a mini-tornado on Petroff’s former home, not uncommon in these parts in summer. (1950 ish) Oliver Brooks and family were resident at that time and baby Terry was lucky to survive when the main chimney of the house crashed onto his cot. His mother had instinctively picked him up when the wind strength started to trouble her (note hole in the centre of the roof where the offending chimney had been)