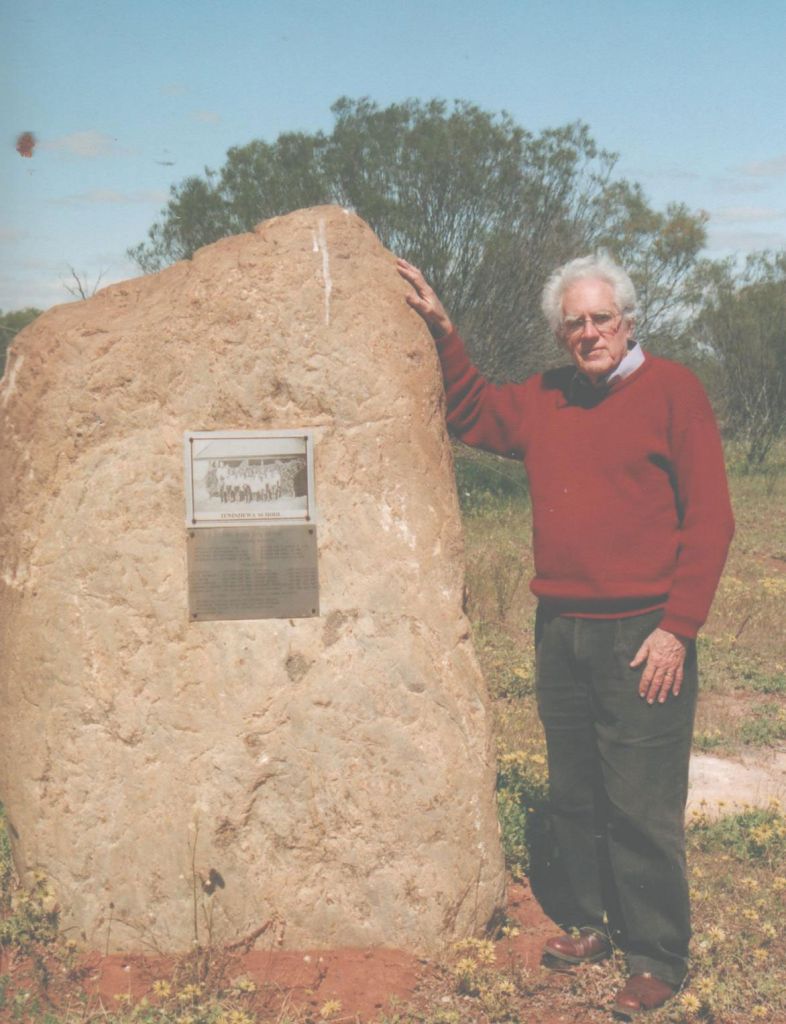 My name is Brian Griffith. I am a descendant of H. J. Stafford, a pioneer of the Tenindewa district. My father, who established the store in Tenindewa, married Ivy Stafford, daughter of H.J.Stafford. My Aunt Eva was the first teacher in Tenindewa and married Richard Dunkin. Their son Dick may be remembered by some of those of you here today. My Aunt Doris married Eric Hamilton whose property was a little to the north of the original Dunkin’s farm. David Williams, the teacher in one of the photos, married my cousin Esme, daughter of Joe Stafford, son of HJ.  I lived with my parents- in a house just a few steps to the north east of where the store now is- from 1930 when I was born until we left in 1941. I attended the Tenindewa school from 1935 until, as a one teacher school it was closed and we were all bussed into Mullewa by Fletcher Waldeck.

I imagine that somewhere the photos of us all in front of the school will be on display today. Well, there we all are with our teachers almost eighty years ago. Of course when we looked out at whoever it was who held the camera, for us it was not eighty years ago…for us it was ‘now’. As we organized ourselves to have the photo in the sunshine of that day we none of us knew what the future would hold for us…but there we all are, Davy Latto, Paddy and Keith Butler (we called Keith ‘Laurie” in those days…I don’t know why… with sisters Gloria and Doreen, and there are the Stokes children from Avis to Henry. There is Nellie Stafford, Kath Rumble and Zora Weir, and I am there with my sister Corinne. You may recognize others whose names I have not mentioned. It was the Keefe boys who came by horse each day if I remember correctly.

What were the days like in the school whose replica stands here today? It is difficult for me to call them back to mind, but If you want to know how it was in that one teacher school so long ago imagine the blackboard covered with neat writing and well-formed numbers ….once one of the girls wrote the date as 1939 when it was 1937 and that caused some amusement…and imagine the smell of the chalk, of ink and of slightly sweaty children seated in rows of desks,….and open the windows and let in a blowie or two. There needs to be some crows cawing outside and perhaps a bob tailed lizard in the yard…….That’s what it was like. Once we saw a bungarra run half way up a jam tree outside the school grounds. There was a water tank outside but on long summers when it dried out we had to bring water in bottles (not bottled water!). The bottles were mostly old beer bottles with some cool drink bottles among them. For those of us living near the siding we got to school by walking across the salt flat behind the store and up the ‘hill’. In winter we took a detour across the stone causeway, the remains of which are still quite visible. For most of us the favorite lesson was nature study when we were taken on walks through the bush. We all knew the best places to find spider orchids and donkey orchids. I am sure I could still find those places and hope that those orchids still grow there.

Although it is very many years since I lived in Tenindewa, and where, I suspect, the name of Griffith is no longer remembered, I still consider it my home country. When I am asked where I come from my answer is always “Tenindewa.”

To all of those who like me call Tenindewa home I send my greetings on this significant day. May the replica of the old school stand for another 100 years.

Footnote; In the year 2018 the Tenindewa Community were finally victorious in overcoming bureaucracy to name the road adjacent to the Tenindewa Store “Griffith Road” . The road had gone 105 years without a name