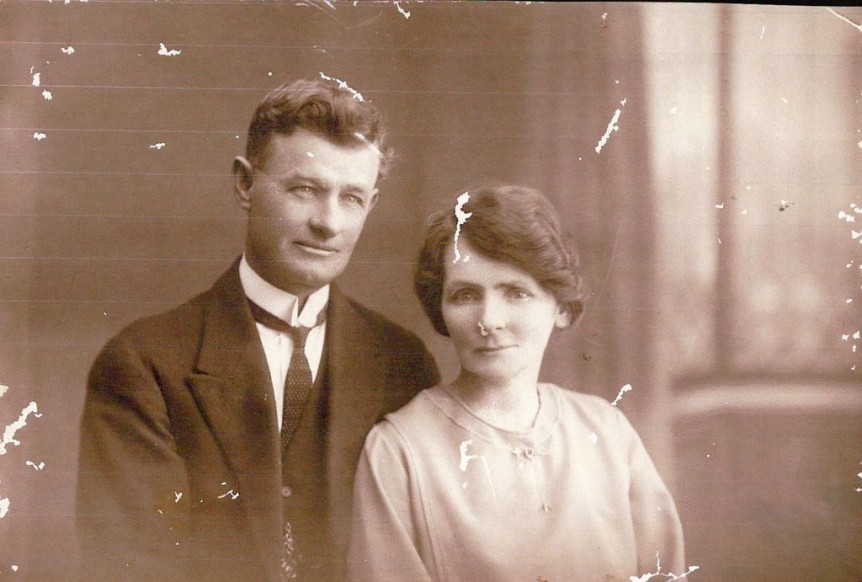 To those that might read and enjoy this story it must be recognized that the facts that we have used here to build this story probably represent just a fraction of what the Fry’s actually undertook in terms of personal and community activities in their reasonably short stay at Tenindewa. This has all been researched and collated some 100 years after the event.

Norman Fry and his wife Marjorie have become somewhat the iconic settlers of Tenindewa. Norman was born in 1874 in Victoria and Marjorie in 1881 in Geraldton.

As mentioned Norman was a Victorian but after attending school and growing up in the “Valley” (The Western District) worked on various sheep stations throughout Victoria. In 1897 he came to Western Australia where he taught in the “State System” for four years. He taught at both the Leederville School in Perth and at Toodyay some 100 kilometers east of Perth

In 1903 Norman married Marjorie Hanlon in Geraldton following which they managed Kockatea Station owned by Copley Bros. in the Mullewa district for a further eight years. They then purchased their own property at Tenindewa, which they named “Kaburnie” and ran it for the next twelve years. In 1919 Norman’s father died and they then returned to the Victoria Valley with their children Adelia, Peter, Horace, Charles and Edith.

The property at Tenindewa was sold to a district “legend” Alexander Petroff who became the focus of the district’s most intriguing mysteries in which he simply, disappeared, leaving a pregnant wife, children and the farm, never to be seen or heard of again. By way of explanation it was feasible, given he was truly a refugee from the turmoil of the Russian Revolution, and given the speculation amongst residents and relatives, is that he succumbed to politically inspired foul play. Further to this there was also some evidence that he was closely related to Nicholas (Romanov) the second who was the last Czar of Russia and who perished along with his entire family at the hands of the Bolsheviks.

As to why Norman and Marjorie (the Fry’s) became “iconic settlers” can be determined from the short story written by Doreen Lindsey about the first settlers and the early development of the Tenindewa township and district generally. In her story “To Sow the Barley” she outlines just a little of their lives in this humble outpost. She writes of the fact that they (the Frys’) were not only some of the earliest settlers but indeed the first people in the area to own a car. They had a successful racehorse named “Tenindewa” that on one occasion won the Yalgoo Cup to which a gold watch was presented. This watch still exists and keeps good time. It is in the hands of a Mr. Norman Keilar of Melbourne (April 2015) who is the Grandson of Norman and Marjorie Fry. Interestingly Alex Petroff also purchased this horse “Tenindewa” at the time of the farm purchase so maybe that may have had something to do with his absconding? It (the horse) might have run out of steam after Yalgoo?

Something that has not run out of steam  but not dissimilar to the watch is a Rushton Proctor Steam Engine that Fry  purchased in 1906 . This machine was built in 1904 and purchased by Fry and hauled to Tenindewa in 1906 from Geraldton and fantastically and remarkably is still operating and in as new condition. It is currently owned and displayed regularly by the Royal Agricultural Society of WA. It was used for cutting chaff and the like at Tenindewa before it was on-sold to Petroff and then to the OBrien Family and eventually after many years of idleness was acquired by a team of steam enthusiasts, transported to Toodyay, and rebuilt under the watchful eye and artful hands of a Mr. Peter Dymond. It can be seen in operation at various shows but especially at the Royal Show in Claremont at the Showgrounds there.

Racing was obviously very important as on “Kabernie” they (the Fry’s) had a racecourse built on the property but what set them apart was the “stately home” which again according to Doreen’s book “featured verandahs all round with grape vines flourishing”. Also it had “position” so to speak. It was not only located in a reasonably picturesque little paddock but it was clearly visible from the Railway Station, the main road and the village itself. That classic bungalow house stood until about 1980. It became known colloquially as the “Big House”. Again, note Doreen’s comment in respect to Christmas Tree events at Tenindewa in those years; “Some of these occasions were also held in Fry’s big house over the line” (The house was completed in May 1914 and the contractor/builder was Mr Bert Crothers)

There are photographs and even a painting of that place still around today.

L-R Marjorie Fry (mother), Horace, Peter, Charles, Edith and Norma out the front of their house

Painting of the Fry House

“There were horse races for the farmers that fancied their horse could gallop and there were some interesting finishes”. “Plenty of fruit and sweets were distributed amongst the kiddies and a tank of boiling water was available all day (It’s a thirsty place). Mrs. Stokes and Mrs. Fry and many others helped to make the thing a success”.

Being a Victorian it is not surprising Norman featured in other sporting pursuits evidenced by the Guardian report of March 1912. The Tenindewa cricket team triumphed over Mullewa at Tenindewa but sadly on that occasion he was run out for a duck. In later life, in Hamilton Victoria, he participated in Lawn Bowls well into his 90s.

It is known that Norman and Marjorie were strong Christians and of the Presbyterian faith which is evidenced by the baptismal records of second son Horace. He was christened by the Rev. W. Floyd Shannon B.A. in Geraldton on the 1st of September 1909. In fact Horace revisited Tenindewa in 1988 and was shown around by the late Keith Butler whose family would have lived just 350 meters east of the Fry’s in those early times.

It must be acknowledged here that Horace’s daughter (and thus Norman’s granddaughter), Wilma Preston of Port Fairy in Victoria has been of massive assistance in the compilation of this material.

Their Christianity, Community Spirit and a vision for the future was demonstrated most overtly when the first school at Tenindewa opened on the 31st of March 1913 in a building donated by the Fry’s. In some ways this is not so surprising given Norman’s initial educational based vocation.

The building was one room some 20 feet (6 meters) by 12 feet (3.2 meters), which had an iron roof, a new jarrah floor with hessian walls and was situated just across the paddock at the corner of the main Mount Magnet to Geraldton Road and the Menang Road

One acre of land was included with this building on the understanding that the Education Department would be responsible for the costs of the survey and land transfer fees. (All donated by Fry)

The first teacher was Miss Eva Stafford who was eldest daughter of another of the pioneer settlers.

Norman Fry became an inaugural member of the Mullewa Road Board and indeed the second Chairman of the Mullewa Road Board after Mr. D Warren. Norman served the Board from and including 1911 until 1914 with the last two as Chairman. During his tenure as Chairman a decree was pronounced that “Road Board meetings were to be always called on the night of the full moon so that any members who rode to the meetings could see their way home.” Norman would have to have ridden some 11 miles home (20 kilometers) after meetings. No doubt he presided over far more important issues than that but “the decree” is a subtle reminder of logistics to be considered in that age that we have for many years have forgotten and now take for granted as a non-issue.

Norman also spent a further 21 years in local government after his return to Victoria on the Mt Rouse Shire. Included in that was another (4 year) term as President.

An example of his agricultural prowess it was reported in the Sunday Times in WA on the 9th of October 1910. (Quoted exactly as written, in the style of the day)

“Mr. Fry presents another example of what can be done by hard work and perseverance. With capital of less than one hundred pounds ($200), he selected 619 (248 hectares) acres of land at “Woolya”, (as Tenindewa was called then) 55 miles (80 Kilometers) from Geraldton; a little over two years ago and immediately proceeded to work to get the quickest possible return. His family consisted of five, himself and wife three children, and there was no time to be lost.

The country was typical of the wheat-lands, consisting of light sandy loam, timbered with salmon gum, gimlet and jam, and ringbarking was engaged at once, this work being varied by the building of a two roomed iron house and the preparation of a homestead garden.

This season there are some 300 acres (120 hectares) under crop, all looking well and a further area ringbarked and cleared ready for the coming season.

He has bought all the machinery he requires, some of which is fully paid for, and the whole is well housed in substantial sheds.”

It is documented also that the Fry’s purchased Lease 93/1968 on the 1st of October 1908 which was of some 4000 acres. (1600 hectares) This would have made them substantial landholders in terms of the acreage generally held in that area in those days. This holding was immediately to the south of the original purchase at “Kaburnie” Not one to die wondering Norman experimented various crops during his time at Tenindewa and in March 1916 we see the Geraldton Guardian report him experimenting with Ambercane, Sweet Clover, Egyptian Millet, Guinea Corn Maize and last but certainly not least, Cotton.

After returning to Victoria, Norman then purchased his brother John’s farm “Springbank” but sold it after a few months. In April 1920 they purchased a property at Penthurst which they named “Kaburnie” after his farm in The West. After a life associated with agricultural and pastoral pursuits Norman and Marjorie retired to Hamilton 1947.  Marjorie passed away in 1956. Norman was blessed with a long life, cheerfully coping with blindness in his later years, passing away just 3 days short of 99 years. (1974)