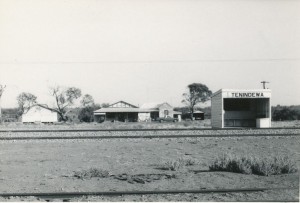 When the Tenindewa Railway siding was eliminated on 12.1.1987 a builder from Geraldton named Carnamello had the contract for the demolition task. He kept the Tenindewa siding sign and not long after moved to Mandurah. (550 kilometers south of Geraldton)
(Note the sign on the Siding Shed; right)

A friend of mine told me that he had seen the sign being used as a building plank in Mandurah.

I rang David Meadowcroft and he, after much bartering, swapped a new plank for the old sign. He then left the sign with my sister and brother-in-law Gloria and Bill Cox. They, in time, transported it to Geraldton in their caravan from whence it was then conveyed to Tenindewa by my brother Paddy in his utility.

The Old Siding Sign is now resident and displayed upon the Store where it duly belongs.